One week after Assemblywoman Rodneyse Bichotte, the chair of the Brooklyn Democratic Party, appointed a 12-member task force to examine the gender parity requirements for election to the County Committee, she announced that after the group’s first meeting on Aug. 12 the appointment of four additional members.

The new members include transgender activist T.S. Candii and non-binary AIDS community organizer Jason L. Walker. Though the task force was established to give non-binary folks the opportunity to run for the County Committee, the original group did not include any non-binary or trans members.

The task force is examining decades-old rules that require each Assembly district to hold elections for both a male and a female representative. When those rules were adopted, the aim was to ensure women parity with men in local Democratic Party decision-making.

As Bichotte noted in her original Aug. 6 announcement of the task force, women now make up more than a majority of grassroots party activists in Brooklyn so the old requirement actually limits women in their impact on party politics relative to their participation. As important, the requirement also limits the ability of non-binary Brooklynites to serve on the County Committee unless they are willing to state a gender identity at odds with their true identity.

Bichotte’s establishment of the task force came a little more than three months after a Brooklyn Supreme Court judge tossed a lawsuit lodged by six would-be candidates who targeted the party for maintaining the binary gender rules. The judge in that case dismissed the suit on procedural and timing grounds without ruling on the merits of the issue at stake.

“As a new county chair my first priority is to expand voting rights and the ability for all to participate in our democracy and run for office, and that very much includes individuals in Brooklyn regardless of identification as binary — male or female, non-binary, gender fluid, genderqueer, or transgender,” Bichotte said on Aug. 6.

The lack of non-binary and trans people in the original 12-member group, however, was immediately noted both by plaintiffs in this past spring’s lawsuit and by some of Bichotte’s appointees.

“I was a little surprised when I heard about it,” Derek Gaskill, one of the lawsuit plaintiffs, told Brooklyn Paper’s sister publication Gay City News on Aug. 7. “I know some of the other plaintiffs didn’t hear of it either.”

Nemir-Olivares, meanwhile, said at the time, “It would be better if we had the voices of the non-binary or trans people who are most impacted by these rules. I’m hopeful the leadership of the Democratic Party expands the task force in the coming weeks.”

In a tweet following the decision to to expand it, Nemir-Olivares wrote, “While it would have been ideal to have a larger and broader non-binary & transgender representation, we are glad that @bkdems added two more voices at the table including the extraordinary @LamarWalks11 and @TS_Candii whose life experiences and advocacy would be ideal for this panel.”

In a written statement, Walker said, “The strengthening of our democracy is achieved when we expand its accessibility. As a Black person who identifies as non-binary, finding respect and representation in our community and within our government has been a challenging and hurtful experience. Appointment to this Task Force by our first chairwoman of the Brooklyn Democratic Party demonstrates her true commitment to our democracy. I thank the TGNCNB community for their resilience and support, and for strengthening the Democratic Party and democracy in New York.”

Gaskill, the former plaintiff, however, was less impressed by Bichotte’ action, echoing Nemir-Olivares’ view that it would have been “ideal” to add more non-binary and transgender members to the task force.

In an August 14 interview with Gay City News, Gaskill acknowledged that the non-binary and transgender communities have both LGBTQ and cisgender straight allies on the task force, but said of the decision to include seven cisgender women and seven cisgender men but only two non-binary or transgender members, “I think that makes no sense. I think it’s pretty obvious, but I guess it’s not.”

Elaborating on his complaint that none of the lawsuit plaintiffs were included in the task force, Gaskill said, “I feel like maybe as first time candidates [Bichotte] questioned whether we were qualified… But we are the people who lived it.”

Walker is a senior coordinator for the Health Global Access Project, which advocates for universal HIV treatment access, and formerly spent three years as an HIV/AIDS policy coordinator for VOCAL-NY. Candii is lead organizer with DecrimNY, which is pushing for the full decriminalization of sex work in New York State, and with the Repeal Walking While Trans Ban coalition, which aims to repeal a state loitering statute often enforced to target Black trans women.

This story first appeared on gaycitynews.com. 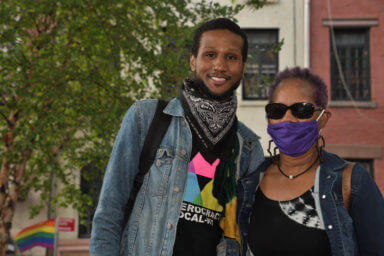