For the first time in its history, the price of Bitcoin has topped $20,000 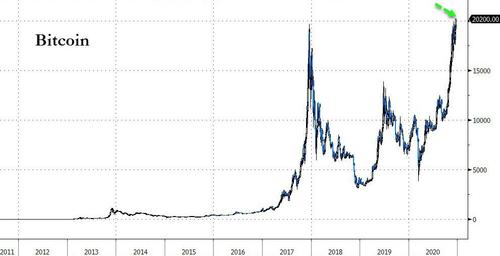 Increasing optimism in the last few days over a trillion-dollar-ish COVID relief bill have catalyzed this latest push higher as investors seek some non-government-dilutable store of wealth. 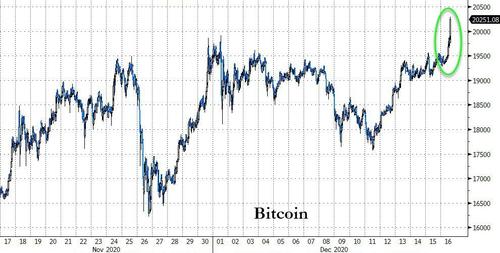 Bitcoin is “eating the world” thanks to 10-year returns of over 6,200,000% and annualized returns of roughly 200% per year, investment strategist Raoul Pal has said.

In a tweet on Dec. 15, Pal revisited his oft-quoted phrase as new data showed the extent of Bitcoin’s outperforming of major assets. 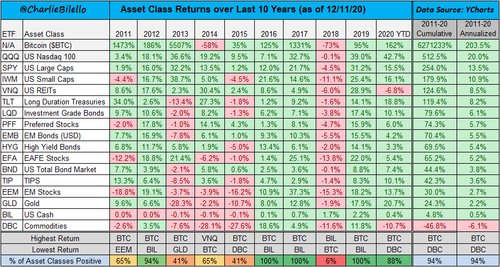 Alternatively, as CoinTelegraph notes, whether it’s dollar-cost-averaging or a one-time investment of $100 10 years ago, Bitcoin dwarfs other investments such as Apple or Amazon over the past decade. 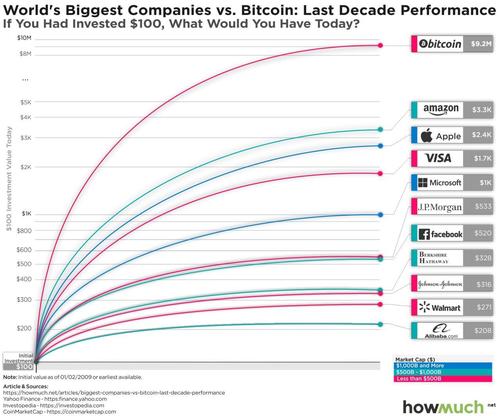 Which is perhaps why “Long Bitcoin” has become the 3rd “most crowded” trade according to BofA’s Fund Manager survey: 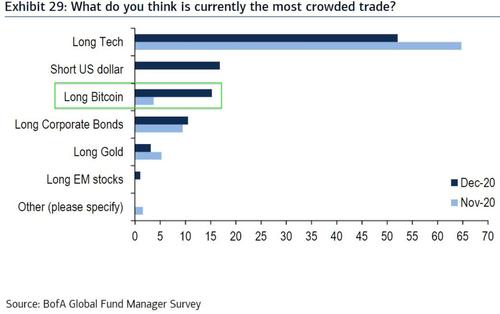 As CoinTelegraph concludes, in a year in which money printing and stimulus has triggered fears of massive inflation, the trend away from cash and into uncorrelated assets such as Bitcoin is clearly highlighted by the survey’s results. Many investment managers are seriously considering Bitcoin purchases for the first time, encouraged by the example of famous investments made by MicroStrategy, Square and Paul Tudor Jones. Following suit, insurance company MassMutual and investment manager Ruffer disclosed massive Bitcoin purchases in the last week as well.

The Bank of America survey also found the fund managers are underweight in cash for the first time since 2013, after buying a disproportionate amount of stocks, commodities and other assets including Bitcoin over the last few months.

This is not the first time Bitcoin has appeared in Bank of America’s monthly survey. In Dec. 2017, Bitcoin topped the survey’s list of most crowded trades, with 32% of respondents naming Bitcoin as the “most crowded trade.”

Bitcoin was named for the first time in a Sept. 2017 edition of the survey, in which it received 26% of respondent votes for “most crowded trade.”

However, institutional interest continues to rise as CoinTelegraph reports this morning that Ruffer Investment Company Limited, an investment manager with shares listed on the London Stock Exchange, has disclosed its new Bitcoin strategy.

Some might remember that Ruffer was ‘outed’ as the infamous VIX Options Whale ’50 Cent’ earlier this year.

In a performance update and manager comment posted on Tuesday, Ruffer said it has added Bitcoin to its Multi-Strategies Fund, primarily as a defensive move against the “continued devaluation” of fiat money. The fund now holds roughly 2.5% of its assets in Bitcoin.

The allocation was made in November after Ruffer reduced its exposure to gold in favor of BTC. The firm said:

“We see this as a small but potent insurance policy against the continuing devaluation of the world’s major currencies. Bitcoin diversifies the company’s (much larger) investments in gold and inflation-linked bonds, and acts as a hedge to some of the monetary and market risks that we see.”

Founded in 1994, Ruffer has 20.3 billion euros ($27.2 billion) in assets under management as of Nov. 30. The firm has roughly 6,600 clients worldwide compromised of individuals, families, pension funds and charities.

Ruffer’s move echoes a recent call by JPMorgan Chase that Bitcoin is quietly eating gold’s market share. In a note to clients that was released last week, quantitative strategies led by Nikolaos Panigirtzoglou said Bitcoin adoption could lead to “structural headwinds” for gold.

“If this medium to longer-term thesis proves right, the price of gold would suffer from a structural headwind over the coming years.”

2020 has gone down as a transformative year for Bitcoin, with firms like Grayscale, PayPal, MicroStrategy and MassMutual rewriting the narrative on digital assets.